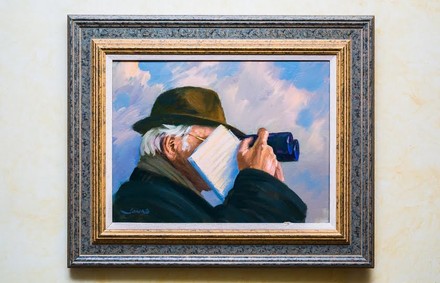 When Peter died at the age of ninety-seven, in July of last year, there ended the life of an extraordinary man who was, to so many of us, a legend; universally known as "The Voice of Racing".

Soon after I set up the Osborne Studio Gallery in 1986 I had a visit, quite out of the blue, from my boyhood hero. Ahead of the game, as ever, he had heard that our gallery was to specialise in racing and equestrian art. From day one he offered enormous encouragement and support and I was, of course, over the moon that a man I idolised should take such an interest in this new enterprise.

Over the subsequent years we developed a strong friendship. In 1998, soon after his final commentary and retirement on Hennessy Gold Cup day the previous November that I, on a whim, and assisted by plentiful Dutch courage, asked Peter whether he would consider becoming our Chairman. He did not give me an immediate answer but, to my amazement, he rang the next day to say he would be delighted to do so.

Over the next eighteen years OSG had tremendous support from Peter. With his ever discerning eye, he loved coming to the private views, and his presence and infectious sense of humour always ensured lively interaction- and the possibility of a little bit of innocent gossip! As the years went by, his love of art, became increasingly apparent to me and I always kept a chilled bottle close at hand for his frequent visits! His inquisitive and intelligent nature observed hidden depths in the paintings that others, including myself, often missed.

Racing art was his great love but, beyond that, he collected works from his travels, particularly from North Africa, seeking out artists in remote places. Interestingly, subjects incorporating Pierrot are well represented in his collection. I did once ask him, after a memorably convivial evening, why clowns were so close to his heart. As was so often the case with Peter, after an evening of bonhomie, when it comes to reporting his answer, my memory fails! Perhaps another may know the answer to this? His beloved wife, Pat, could well have been a possible influence.

All his life Peter was intrigued by artists and as early as the late 1930s he became friends with many prominent painters and sculptors. John Skeaping became a life-long comrade in arms. They shared a much loved greyhound called Slim, whom they raced at White City just after the War, providing many memorable jaunts. Sir Alfred Munnings and Edward Seago also became friends and, in recent years, leading international equestrian artists were willingly cajoled into using their talents to benefit his highly successful annual charitable trust lunch and auction. These acclaimed artists are too numerous to mention, but Peter was enormously respectful of their creativity. Unusually acknowledgement was always made in his commentaries to any trophy or work of art presented; a further legacy of the great man.

In this retrospective, we have borrowed a number of bequeathed works for which we are sincerely thankful. Many others are for sale, of which The Peter O'Sullevan Charitable Trust will be a beneficiary. Additionally we have borrowed photographs and ephemera in an attempt to open a window on both his private and public life, on and off the turf.

His natural modesty forbade it but every indication I had from our conversations in the latter part of his life, suggested he would love others to share some of these memories.

I also think that he would have appreciated how appropriate it is that the period of the exhibition includes the four days of the Cheltenham Festival. It is no secret that this was his favourite time of the year.

I hope you will take as much pleasure out of this exhibition as we have in putting it together. I would particularly like to thank Sean Magee, a close friend of Peter's, for his in-depth archival work, which has helped enable this commemoration of an extraordinary life.