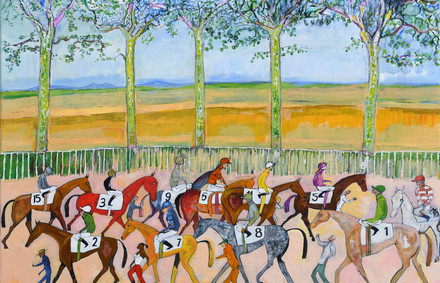 An exhibition of recent works by Elie Lambert, the exhibition runs from 1st April until Thursday 9th April.

Elie Lambert was born in Brussels on 25 April 1949. His mother managed a brasserie with his stepfather, a light-weight boxing champion.

Educated at the Charles Bulls High School, Boitsfort, to the frustration of his teachers Lambert spent more time drawing and painting at the Brussels Art Academy, and training and riding bloodstock on the racecourses of Boitsfort, Groenendael and Sterrebeek, than studying in the classroom.

Learning to ride at very early age, Elie was drawn to horses, and introduced to the racing world and Belgian jockey club (along with Baron Crahay) by the Vicomtesse d’Hendecourt.

After a brief spell in the Navy, he travelled the world, ending up working in Washington DC as a horse trainer. It was here that Elie’s 28 year career as a racing journalist for the Paris Turf commenced, after a chance meeting with Jean Fagu, the publications chief editor.

Elie has lived in Newmarket, Chantilly and Deauville, and now resides in Bonneville, near the stud farm of Baron Edouard de Rothschild, the Haras de Meautry.

A great admirer of Jack Butler Yeats and Pablo Picasso, Elie’s artistic output has been prolific - he has produced art throughout his life, and has never been far from paintbrushes and a sketchpad. Since 2006 his works have been sold at Christie’s, and have become increasingly sought after and prominent on the art market.