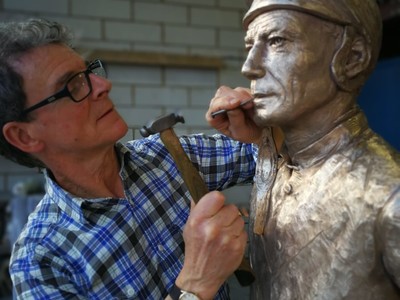 One afternoon in 1972, the sculptor John Robinson, came to my school (Hazlegrove in Somerset) to help a small group of us make clay figures. I was twelve years old. The effect of John’s teaching was, for me, truly inspirational. It was as if a light had been switched on. I felt totally at ease and complete in what I was doing and, from that moment on, I knew that one day I would be a sculptor.

In 1977, following a year at Art School, I went to work for a racehorse trainer in Wiltshire. I had ridden from an early age and the idea of becoming a jockey really appealed. As luck would have it, I rode a winner on my first ride. Two years later, following a spell in Ireland, I took out my professional license.

Over the following years, I rode a handful of winners each season, but sadly did not make it to the top ranks as a National Hunt Jockey. I see this period of my life as a sort of apprenticeship for much of what I do now, for I was always thinking about sculpture and, although I loved riding horses, I found myself spending more and more time in my studio. Drawing upon my experience as a jockey, I made many small equine studies, most of which ended up in the bin. However, some were cast and sold to fellow jockeys, trainers and owners. I also made a series of bronzes for the company, Glen International who were heavily into race sponsorship at the time.

For every jockey, there is a last ride; mine was in a novice hurdle at Chepstow in 1987. Having its first run, the horse ran well finishing third and, at the time, I felt frustrated that my racing days were over but the decision was made and a new and exciting phase in my life was about to begin.

Jockey, Steve Knight, had won the Grand National that year on Maori Venture and he kindly introduced my work to Jim Joel, who liking what he saw, asked me to make a bronze study of his National winner. Two months later, Steve Cauthen won the Derby on Reference Point; he too liked my work and commissioned a bronze of himself and his Derby winner cantering to the start. The Derby was to play an important factor in my career ten years later, but for now these two high profile commissions together with other work that first year, set the seal on my future and I have been a full time sculptor ever since.

I am, predominantly, a portrait sculptor, so whether it be human, such as my life size sculpture of Lord Oaksey or animal, my job is to record and celebrate living form in the best way I can.

The first stage is to know my subject. Photographs may assist but, by their nature, two dimensions can be a distraction when working three dimensionally. I find quick pencil drawings a help in that they assist me in studying my subject intensely, forcing me to think about what I am looking at and recognising the gravity of what I am seeing.

With my subject fixed in my mind, I start to think (if I haven’t decided already), how best to portray my observations. In the case of a horse, it may be standing, walking, jumping or whatever pace or stance I feel is most appropriate. In addition, my client may also wish to add their own ideas, which can often be of great assistance.

Now loaded with all my thoughts and information, I am ready to physically start the sculpture. Firstly, I make an armature (the bones or skeleton of the sculpture) to which I add clay. At this point, I am in one of two places, either in my studio or with my subject, for, whenever possible, I do a proportion of the work from life. In the case of a bust study, sittings will be necessary however, these need not be long and drawn out for the process now is natural and well prepared and much can also be achieved in the studio. When making my study of Gold Cup winner, Denman, I was given free access to him so, as the weather was kind (he was turned out at the time), I was able to do at least half the work from life. This enabled me to forge an understanding which I believe gives the finished work an “edge” it may otherwise not have.

In some cases, such as my posthumous study of Pinza and Sir Gordon Richards for the Derby Trophy 2003, working from life was, of course, impossible. In such situations, I gauge the best archive and photographic material I can find and draw upon knowledge from people who knew, or have known the subjects, in this case, Sir Gordon’s daughter, Marjorie.

There is no specific time taken to create a study from scratch. It may be a week or several weeks, whatever the case may be. Once complete, I invite my client to view the progress I have made. At this point changes, if necessary, can be made. When all parties are satisfied, the work is taken to the foundry to be cast into bronze using the ‘Cire Perdue’ (lost wax) method. This requires great skill and, with the help of the most talented craftsmen in the foundry business, I oversee the process throughout, enabling me to achieve the very best result. 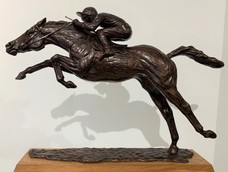 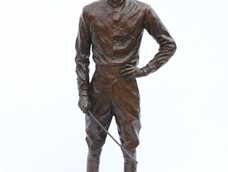 ‘The Working Maquette’ for the life size sculpture, Lester Piggott by William Newton