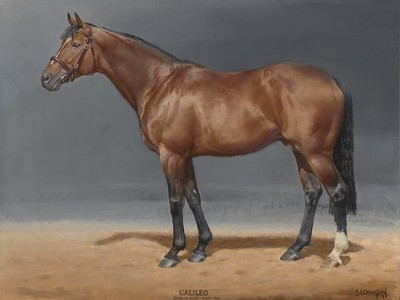 Susan Crawford was born in Scotland in 1941 and was brought up on a farm in East Lothian where her parents bred and trained racehorses. She was educated at St Denis School, Edinburgh and at Priorsfield, Godalming, before studying classical drawing for two years at Studio Simi in Florence. In 1967 she went to Ireland for a few days and stayed for almost two years, thereby kicking off her professional career as an equestrian artist.

On returning to London she bought a studio and started getting private commissions to paint a number of famous racehorses and several royal portraits. She has to date painted 22 Derby winners. Her first joint exhibition was with the Tryon Gallery in 1969, where she sold all her pictures on the opening night.

Over the next 40 years she travelled widely; firstly to the USA then Canada, Germany, Brunei, Australia and the Sultanate of Oman as well as with numerous visits to Ireland and throughout the UK.

The late art critic Stella Walker said of Susan’s work: “Racing historians will be forever in her debt for her convincing portraits of such stars of the turf as Ribot, Northern Dancer, Sadler’s Wells, Shirley Heights, Nijinsky, Sir Ivor, Mill Reef and Dancing Brave. The quality and distinction of her work, effectively reflecting the influence of Stubbs, has assured her recognition as one of the most accomplished sporting artists of her era.”

Her portrait of Arkle, Red Rum and Desert Orchid (entitled We Three Kings) is still a best selling print world-wide.

She now lives in the Scottish Borders with her husband Jeremy along with numerous dogs, ducks, chickens and pigeons. They have two children, Jake Phipps (a product designer), and Jemma Phipps (a portrait painter), along with several grandchildren. 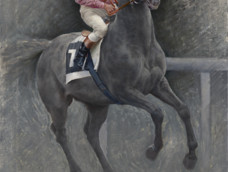