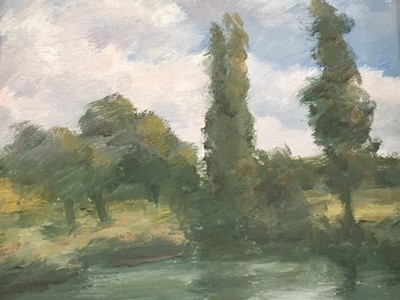 Claudio Carli was born in Assisi, where he lives and works, in 1947.

After studying art in Perugia and Florence, he turned to painting, learning from masters who came to Assisi, such as William Congdon, Riccardo Francalancia and Eugenio Dragutescu.

For several years he taught in Assisi as well as Florence, where he attended the university Department of Architecture. He continued to paint, however, staging important solo shows and participating in collective exhibitions in Assisi and other Italian cities, as well as abroad.
His most significant installations include Ad caelum, Paesaggi di una facciata, Scrap Delivery, la città delle lettere and Presepe on the lawn in front of the Basilica of St Francis in Assisi.

Since the 1980s his works have been displayed at art galleries around the world, from France to Germany, the United States, Spain, England, Poland and Romania. He also participated in the architectural section of the 1985 Venice Biennale and at the Biennale of Sacred Art in 2002. Also noteworthy is the work in progress entitled Neburose, shared with Bruna Esposito, in the oncology ward of the Carrara hospital in 2006. Istintismi, in collaboration with F. Passalacqua, C. Dell’Amico and L. Virilli, was also a significant experience spanning the two-year period of 1995–97.

Recently he has become interested in natural images and labyrinths, creating large works composed of monochromatic forests and labyrinth compositions on paper and canvas.
He staged two important solo shows in 2009, La belle au bois in Siena at the Magazzini del Sale in the Palazzo Pubblico, and Quasi come vie d’uscita at the Villa Fidelia in Spello.

In 2011 he took part in the collective exhibition at the Osborne Studio Gallery in London and staged the solo show entitled La casa dove… at the Palazzo Malizia in Torgiano (Perugia).
Carli is currently preparing solo shows that will be held in 2012 in London, Brescia, New York and Amsterdam.